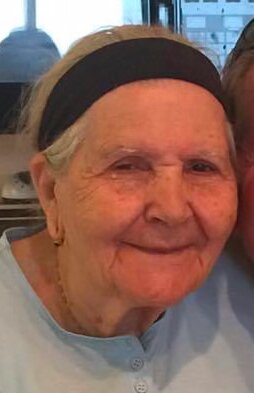 Please share a memory of Girolima to include in a keepsake book for family and friends.
View Tribute Book
Girolima Dragotta, born in 1928 in Belmonte Mezzagno, Sicily, Italy died after a brief illness on December 24th, 2022. Girolima, known by her family and friends as Mimma, came to Vineland to visit her Uncle Placido (Pete) Dragotta in 1970. After several years, she migrated permanently to Vineland in 1973 with her brother Ludovico and her sister Concetta. She lived from 1973 to the present at their residence on South Spring Road. She was predeceased by her father Giovanni and both her brothers Ludovico and Giovanni and her sister Concetta. Mimma raised Giovanni’s children Loredana Dragotta, Patricia Dragotta and Maurizio Dragotta at their home on S. Spring Road. Mimma worked as a seamstress at several factories in Vineland until her retirement in the late 1980’s. Family and friends were often fed at her dining room table and she was known for her superb Italian cuisine. She is remembered fondly by the Carman DiGeorgio family, who cared for her over the last several years. She is also survived by cousins Ann Dragotta Panichello and Mamie Dragotta Pedrick and her cousin Robert Dragotta. Private services are being arranged and burial will be in Sacred Heart Cemetery in Vineland.

Look inside to read what others have shared
Family and friends are coming together online to create a special keepsake. Every memory left on the online obituary will be automatically included in this book.
View Tribute Book
Share Your Memory of
Girolima
Upload Your Memory View All Memories
Be the first to upload a memory!
Share A Memory
Plant a Tree