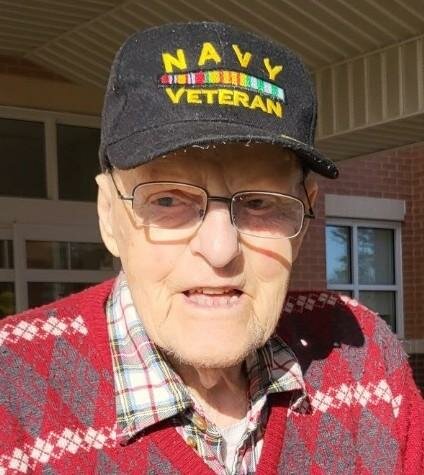 Please share a memory of Andre to include in a keepsake book for family and friends.
View Tribute Book
Andre F. Bourgeois, age 98, passed away on Wednesday, November 23, 2022 at Inspira Medical Center in Vineland. Born in Montreal, Quebec, Canada he was the husband of the late Irmgard Grimm Bourgeois and the son of the late Firmin C. Bourgeois and Aldea Daignault Bourgeois. In 1926, he and his family moved to the northern part of Vermont where he attended grammar school. He had been a resident at the New Jersey State Veterans Memorial Home in Vineland for three years and had lived in Cedarville, Salem and Shiloh prior to that. A Veteran of the United States Navy, he enlisted at the age of 18 and served his country during World War Two in the Pacific Theater as a signalman on the USS Essex. On October 10, 1953 Andre married his wife, Irmgard. Prior to his retirement, he had been employed with the Mettler Instrument Corporation in Hightstown in the shipping department for over 25 years. After moving to this area and settling in Shiloh, he wrote three books regarding his family history and his time of service during World War Two. Following the passing of his wife he came to live in Cedarville with his son, Marcel, until moving to the Veterans Memorial Home. He was a member of the Parish of the Holy Cross, St. Teresa of Avila Church in Bridgeton. In his younger years he enjoyed golfing and fishing. Surviving are his son, Marcel Bourgeois and his companion and dear friend Barbara Sanza of Cedarville; two grandsons, Timothy Bourgeois of Newport and James Bourgeois (Jessica) of Chester and two great-granddaughters, Sadie Mae and Clary. In addition to his wife and parents, he was predeceased by his daughter in law, Juleen Bourgeois and his siblings, Bernard Bourgeois, Remi Bourgeois, Leona Hart, Louisa Gingras, Rose Butler, Theresa Bertrand, Charles Bourgeois and Bruno Bourgeois. His Funeral Liturgy will be celebrated at the Parish of the Holy Cross-St. Michael's Church, 367 Main Street, Cedarville on Friday, December 2nd at 12:00 Noon. Friends will be received at the PADGETT FUNERAL HOME, 1107 State Highway 77, Upper Deerfield Township from 10:00 to 11:00 AM prior to the services at the church. Interment will be private at the Brigadier General William C. Doyle Veterans Memorial Cemetery in Arneytown. In lieu of flowers the family asks that contributions in Andre’s memory be made to the service dog that visits with the residents at the Veterans Memorial Home c/o www.Colethedeafdog.com.
Friday
2
December

Look inside to read what others have shared
Family and friends are coming together online to create a special keepsake. Every memory left on the online obituary will be automatically included in this book.
View Tribute Book
Share Your Memory of
Andre
Upload Your Memory View All Memories
Be the first to upload a memory!
Share A Memory
Plant a Tree