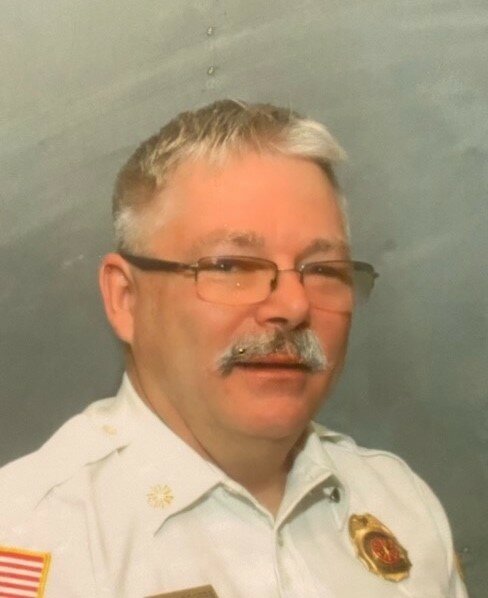 Please share a memory of Floyd to include in a keepsake book for family and friends.
View Tribute Book
Floyd “Mike” Dyer, 58 of Upper Deerfield Township passed away at Inspira Medical Center Vineland on November 15, 2022 after a 9 month battle with cancer with his family by his side. Mike was born in Bridgeton and was the son of Floyd and Alberta Dyer (nee Hildreth). He had been sharing a home with his new bride and love of his life Sue Davidson, for the past 8 years. He was raised in Upper Deerfield Township and graduated from Cumberland Regional High School with the class of 1983. The past several years, Mike has been employed by South Woods State Prison and in his current role of Warehouse Supervisor. Mike started his career as a Volunteer Firemen at the age of 17 and served in many fire departments across the county. His longest and most recent run has been spent at Upper Deerfield Station #33 where he has served as acting Chief since 2016. His greatest accomplishment will always be his unconditional love and friendship and at times, his twisted sense of humor. Mike’s tireless dedication to his community, friends and family will leave a void in so many of us. Mike has been a friend, a mentor and a leader to those who have been lucky enough to have been in his presence or worked by his side. He made every effort to share his knowledge and years of firefighting experience with those he took under his wing, and there were many. With Mike, you were family and he made sure you knew that. In his free time, it was limitless depending on the day. You could find Mike working in his woodshop chasing his passion of building custom tables and anything else his creativity presented, camping with his sidekick Aaron, spending time on his boat or being a master behind his grill and his love of cooking. Whatever it was, he always had an infectious smile, a sideline wise-crack, Sue by his side and a Miller Lite in his hand. In addition to his parents and his wife Sue, he is survived by two sisters, Kathleen Rizzo (Anthony) of Pittsgrove and Tracy Hampton (Bobby) of Upper Deerfield. Nephews’ Carl M. Tozer, Anthony Rizzo, Jr. and a niece Brianna Lincks. “Well done good and faithful servant” – Mathew 25:23 “We’ll take it from here” – your crew from Station #33 Funeral Services will be held at 12:00pm on Saturday, November 19th, at the PADGETT FUNERAL HOME, 1107 State Highway 77, Upper Deerfield Twp. Friends will be received at the funeral home 9am to 12pm prior to services. Interment will take place at Laurel Lawn Cemetery in Upper Deerfield Twp. Written condolences can be sent to the family through the funeral home website at www.padgettfuneralhomes.com. In lieu of flowers, donations can be made to Upper Deerfield Volunteer Fire Station #33 – 69 Cornwell Drive, Bridgeton, NJ 08302.
Saturday
19
November

Look inside to read what others have shared
Family and friends are coming together online to create a special keepsake. Every memory left on the online obituary will be automatically included in this book.
View Tribute Book
Share Your Memory of
Floyd
Upload Your Memory View All Memories
Be the first to upload a memory!
Share A Memory
Plant a Tree