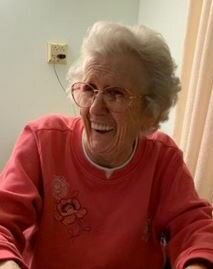 Please share a memory of Bessie to include in a keepsake book for family and friends.
View Tribute Book
Bessie G. Rasinger, 91, of Hazle Township, PA passed away on Friday, November 4, 2022 at Mountain Top Healthcare and Rehab Center in Mountain Top, PA. Born in Bridgeton, NJ to the late Walter Gaskill and Edith Wallace Gaskill, she was the wife of the late Edward W. Rasinger. She had been raised by her grandmother, Mary Sutton in Bridgeton. Bessie had moved to Hazle Twp, PA in 1993 where she had been a resident for the rest of her life. Prior to her retirement, Bessie had worked as a cashier at the former Jamesway Department Store in Vineland and had also worked as a crossing guard for the Bridgeton Board of Education. She was a former member of Berean Baptist Church in Bridgeton. In her free time, Bessie was an avid reader and would read any book she could get her hands on. In more recent days, she had taken up the hobby of adult coloring books. She is survived by; two children, Bill Rasinger and his wife, Danielle of Hazle Twp. And Renee Rasinger of Bridgeton; three grandchildren, Brandi Valentine (Frank), William D. Rasinger (Amanda) and Christopher Rasinger (Amanda); two great grandchildren, Benen Rasinger and Noah Rasinger and a third great grandson due in January, baby Valentine. She was preceded in death by; her husband, Edward D. Rasinger; three sisters, Mary Trout, Linda Gaskill and Loretta Hoffman and her brother, Pete Gaskill. Funeral services will be held on at the PADGETT FUNERAL HOME, 1107 State Highway 77, Upper Deerfield Twp. Thursday, November 10th at 11 AM. Interment will take place at Overlook Cemetery in Bridgeton. Friends will be received at the funeral home from 10 AM to 11 AM prior to the services. Written condolences can be sent to the family through the funeral home website at www.padgettfuneralhomes.com.
Thursday
10
November

Look inside to read what others have shared
Family and friends are coming together online to create a special keepsake. Every memory left on the online obituary will be automatically included in this book.
View Tribute Book
Share Your Memory of
Bessie
Upload Your Memory View All Memories
Be the first to upload a memory!
Share A Memory
Plant a Tree