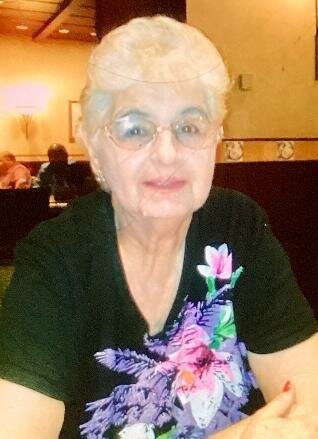 Please share a memory of Theresa to include in a keepsake book for family and friends.
View Tribute Book
Theresa M. Lane, age 83, of Millville passed away unexpectedly on Friday, October 28, 2022. Theresa was born in Brooklyn, NY to the late Thomas Carosella and Mildred Menieri Carosella. Theresa married Harold Edward “Chick “Lane on October 19, 1959. In the late 1960s the two moved to the Vineland area where they spent most of their lives. Theresa was a stay at home mom who enjoyed building forts with her kids and encouraged them all as they brought home every animal rescue they could find. She worked with her husband for a time at Newfield Cold Cuts and was involved in numerous community events. Moving to Cedarville in the early 90s, Theresa became a fierce animal advocate and for the next 35 years continued to give to that community. She enjoyed her trips to Atlantic City with Chick, crafting and doing puzzles. Her main focus later in life was doting on her grandchildren and great grandchildren. Theresa was such a kind, sweet and generous soul who cherished life and all people. She was preceded in death by her husband, Harold “Chick” Lane, her parents Mildred and Thomas Carosella. Surviving are her children, Theresa Swartz-Lane (Tracy), Rickey Lane (Monica), Thomas Lane, Steven Lane and Patricia Knipe ( Jim); her grandchildren, Kristina Lane, Katie Helig, Brittany Lane, Richie Lane, Jessica Agliano (Devin); her great grandchildren, Ethan, Alexandra, Devin, and Angelo, Addison, Gabriel, Chance and E’stella, Ryleigh and Brooklyn and step-grandchildren, Amanda and Alex. She was cherished by many family and friends especially those at Caring Inc. Red Oaks and at JC Plaza. Theresa loved life and loved to laugh. May her joy of life be the memory that lives with you forever. Funeral services will be held on Friday, November 4th at 11 AM at the PADGETT FUNERAL HOME, 1107 State Highway 77, Upper Deerfield Township. Friends will be received at the funeral home from 10:00 to 11:00 AM prior to the services. Interment will take place at Cedar Hill Cemetery in Cedarville.
Friday
4
November

Look inside to read what others have shared
Family and friends are coming together online to create a special keepsake. Every memory left on the online obituary will be automatically included in this book.
View Tribute Book
Share Your Memory of
Theresa
Upload Your Memory View All Memories
Be the first to upload a memory!
Share A Memory
Plant a Tree