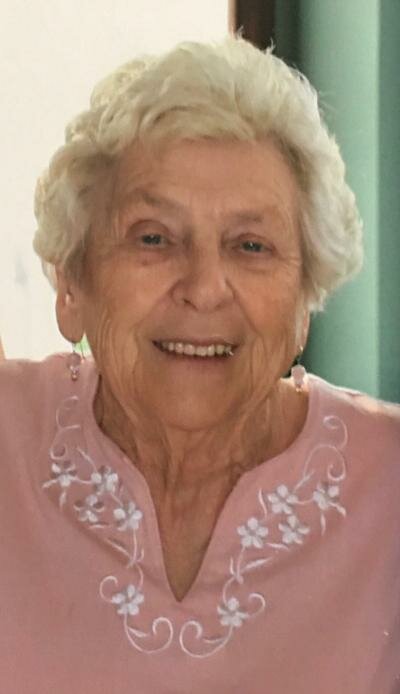 Please share a memory of Lenora to include in a keepsake book for family and friends.
View Tribute Book
Lenora D. Grusemeyer, 93, of Ocean City and formerly of Bridgeton passed away on Monday, April 25, 2022 at her home under the care of her family and hospice. Born in Bridgeton to the late Leonard Beebe and Della Pierson Beebe, she was the wife of the late John J. Grusemeyer. Lenora had been a resident of Ocean City for the past 20 years and prior to that she had resided in Bridgeton and Hopewell Township. Before her retirement, Lenora had been employed at the Harrah's Casino Hotel in Atlantic City as a security guard until she was 80 years old. She was a member of the Parish of the Holy Cross and had been very active in years past at both Immaculate Conception and St. Theresa of Avila Churches. She is survived by her children, John Grusemeyer (Mary Jane), Michael Grusemeyer, Robert Grusemeyer (Debbie), William Grusemeyer (Sissy) and Debbie Dallett (Gary); five grandchildren, Danny (Jenn), Stephen (Sarah), Michael (Melissa), Amy and Jamie; eight great-grandchildren, Tyler, Jacob, Madeline, Nicholas, Daniel, Ellie, Luke and Henley and a great-great-granddaughter, Khloe. Besides her husband, John, she was preceded in death by her grandson, Scott Grusemeyer and two brothers, Leonard Beebe and Raymond Beebe. The funeral liturgy will be celebrated at The Parish of the Holy Cross, St. Teresa of Avila Church, 46 Central Ave, Bridgeton on Wednesday, May 4th at 10 AM. Interment will take place at Fernwood Memorial Park in Hopewell Twp. A visitation will be held at the PADGETT FUNERAL HOME, 1107 State Highway 77, Upper Deerfield Twp. on Tuesday evening, May 3rd from 6 PM to 8 PM. In lieu of flowers, the family requests that donations be made in Lenora's memory to Holy Redeemer Hospice, 1801 Rt. 9 North, Cape May Court House, NJ 08210. Written condolences can be sent to the family through the funeral home website at www.padgettfuneralhomes.com.
Tuesday
3
May

Look inside to read what others have shared
Family and friends are coming together online to create a special keepsake. Every memory left on the online obituary will be automatically included in this book.
View Tribute Book
Share Your Memory of
Lenora
Upload Your Memory View All Memories
Be the first to upload a memory!
Share A Memory
Plant a Tree