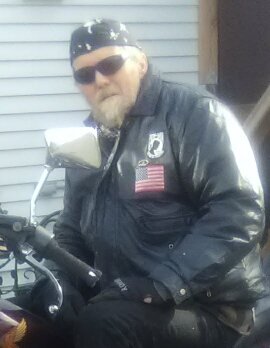 Please share a memory of George to include in a keepsake book for family and friends.
View Tribute Book
George Travis, 59, of Minotola passed away on Sunday, April 10, 2022 at his home. Born in Darby, PA to the late James Alfred Hockenberry and Mary Theresa Travis, he was the husband of Sharlene Ogborn Travis. George had resided in Minotola for the past 2 years and before that he had lived in Pittsgrove Twp. Prior to his disability, George had worked as a delivery driver and mechanic for Dunkin Donuts in Vineland for several years. He had also been employed by North American Van Lines and Harrah's Casino Hotel in Atlantic City. He was a veteran of the United States Army serving during peacetime. In his free time, he enjoyed riding his Honda Maverick motorcycle. He also spent much of his free time doing auto repairs for family and friends in his neighborhood. He loved to help people in need and loved to use his auto repair skills to do so. He is survived by; his wife, Sharlene Travis of Minotola; his children, Tara Ann Travis of Blackwood, Amber Lynn Myers of Pittsgrove Twp. and Felicia Marie Russo of Vineland; his five grandchildren, Autumn, Lily, Matthew, Savannah and Katie; his sister, Lenore Johnson of Atlantic City and two brothers, Richard Kohnow of North Carolina and Thomas Stevenson of Millville. Besides his parents, he was preceded in death by, his daughter, Tiffany Rose Travis. Funeral services will be held privately at the convenience of the family. Written condolences can be sent to the family through the funeral home website at www.padgettfuneralhomes.com.

Look inside to read what others have shared
Family and friends are coming together online to create a special keepsake. Every memory left on the online obituary will be automatically included in this book.
View Tribute Book
Share Your Memory of
George
Upload Your Memory View All Memories
Be the first to upload a memory!
Share A Memory
Plant a Tree