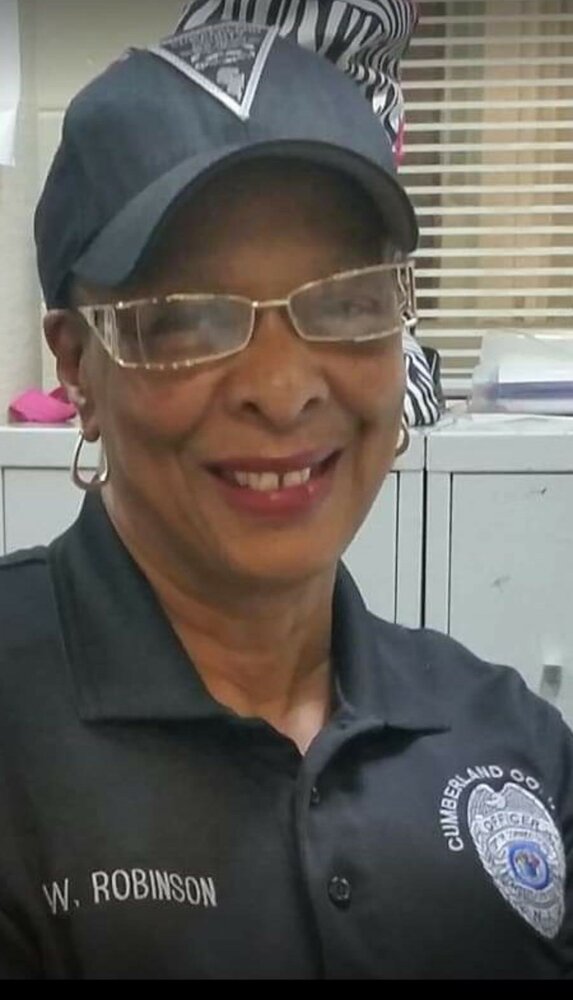 Please share a memory of Wanda to include in a keepsake book for family and friends.
View Tribute Book
Wanda (Jamison) Robinson, 68, of Millville went peacefully to be with the Lord on Tuesday, April 5, 2022. Ms. Robinson was a native of Bridgeton until moving to Millville in 1996. She had attended Bridgeton Public Schools and graduated in the class of 1972 from Bridgeton High School. She had attended Star Technical Institute and graduated with a Medical Assistance Certification. She was formerly employed by the Vineland Developmental Center from 1977-1987 and later the Castle Casino and Hotel in Atlantic City and the Garden Terrace Buffet for 2 years each. In 1995, she became employed by the Cumberland County Department of Corrections as a corrections officer. In 2003, she became the first female to hold the position of Female Intake Officer and she held that position well. In 2004, she was awarded the the honor of Officer of the Year by the Warden's Association. She loved her job and her co-workers. She was an active member of the Greater St. Augustine AME Zion Church in Bridgeton, where she served on the Usher Board and as a class leader and sub-pastor. She was a former member of United Inspiration under the direction of Floyd T. Myrie whom she adored. She was an avid fan of the Dallas Cowboys and enjoyed watching Jeopardy and Wheel of Fortune. She also loved listening to gospel music. Wanda was the daughter of the late Delores Jamison and the late Samuel Thomas. She is survived by; her son, Marlon Scott Jamison and his fiance, Amehia; her beloved companion of 40 years, Charles Bergen; five grandchildren, Lamar Kinsey, Romonte Mosley, Marlon Jamison, Jr., Saydiah Robbins and Antwana Mathias all of Bridgeton; two god-daughters, Krystal Willis of Salem and Yashica Fraizer of Atlanta, GA; ten sisters, Deborah Lowe (Isaac), Valerie Jamison, Kim Pauley of Bridgeton, Marla Jamison of Maryland, Shelly Jamison of Fort Dix, Jaqueline Jones (Leon) and LaShawn Thomas-Aulu (Damus) both of Baltimore, MD, Maxine Miller of California, Gwanetta Revis (Carl) and Micheller Turnage of Rocky Mount, NC; seven brothers, Edgar Brown of Bridgeton, Richard Jamison of Bridgeton, Keith Jamison of Millville, Williston Jamison, Bryan Jamison and Clarence Jamison all of Bridgeton, and Tyrone Mathis of Rocky Mount, NC; her very devoted friends, Rebecca “Becky Ann” Walker, Toni Loatman Sease, Valerie Loatman Anderson, Gail Mack Fraizer, Jennifer Melton, Carolyn Blount Stevens, Mattie Butler, Jayne Alston, Deborah Days Williams, Darlene Cochran and Diane Johnson Ortiz and host of aunts, uncles, nieces, nephews, cousins and many friends. She was preceded in death by; her parents; her grandparents, Edgar and Carolyn Brown, Sr.; her brother, Ralph “Peter” Jamison and two sisters, Denise Jamison and Darlene Dent Jones. Funeral services will be held at Glory Tabernacle, 1010 Buckshutem Rd., Bridgeton on Saturday, April 16th at 11 AM. Interment will take place at Cedar Hill Memorial Park in Hopewell Twp. Friends will be received at the church from 9 AM to 11 AM prior to the services. Written condolences can be sent to the family through the funeral home website at www.padgettfuneralhomes.com.
Saturday
16
April

Look inside to read what others have shared
Family and friends are coming together online to create a special keepsake. Every memory left on the online obituary will be automatically included in this book.
View Tribute Book
Share Your Memory of
Wanda
Upload Your Memory View All Memories
Be the first to upload a memory!
Share A Memory
Plant a Tree