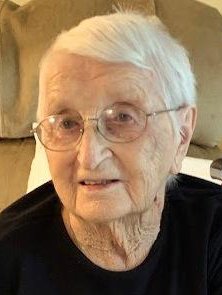 Bertha was born on August 15, 1922 in Philadelphia and lived at 119 Reed Street in that city until her family moved to Garton Road in Deerfield Township in the early 1930s. She attended Bridgeton High School and served in the United States Navy from 1943 until she was honorably discharged as a Storekeeper D Third Class in 1946.

During her tour of service in Honolulu, she met her husband, Clifford, who also served in the Navy. After she and Clifford were married in 1946, Bertha was a stay-at-home mother until 1970 when she began working as a Cottage Training Technician at the Vineland State School (now the Vineland Developmental Center) until her retirement in 1983.

Bertha enjoyed fishing and crabbing and for many years she and Clifford owned a second home in Bay Point, Lawrence Township where they kept a boat on Cedar Creek. She also enjoyed dogs, especially her most recent companions Snicker and Chipper. Bertha was an avid reader, enjoyed gardening, exercising and following her favorite team, the Philadelphia Phillies.

She was pre-deceased by her husband Clifford, daughter Bertha LaCavera of Greenwich, her brothers Alexander, Michael and Samuel, her sisters Mary Brennan, Stella Zatwaska and Anna Cini and her niece Mary Ann Harrington.

A private graveside service will be held at Overlook Cemetery in Bridgeton. In lieu of flowers, the family suggests that donations be made to the The Parish of the Holy Cross, 46 Central Avenue, Bridgeton, NJ 08302 or the Cumberland County SPCA, 1244 North Delsea Drive, Vineland, NJ 08360.

Arrangements are under the direction of the PADGETT FUNERAL HOME, Upper Deerfield Township. Written condolences may be sent to the family through the funeral home website at www.padgettfuneralhomes.com.

Share Your Memory of
Bertha
Upload Your Memory View All Memories
Be the first to upload a memory!
Share A Memory
Plant a Tree