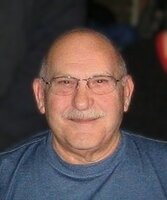 Louis P. Benedetti, 80, of Upper Deerfield Twp. passed away on Saturday, March 19, 2022 at his home. Born in Philadelphia, PA to the late Louis Benedetti and Josephine Miccucci Benedetti, he was the husband of Sharron Trembley Benedetti. He had been a resident of Upper Deerfield Twp. since 1975, prior to that he had resided in Philadelphia. Louis was a veteran of the United States Marine Corps serving his country during the Vietnam War. He was an electrician for Leone Industries in Bridgeton, retiring after 30 years. Prior to his work at Leone he had been a police officer serving in the city of Philadelphia. In his free time, he enjoyed 50's and 60's rock and roll, spending time with his family and traveling, especially to Palm Beach. Fishing was his favorite thing to do especially at Silver Lake, Sunset Lake and Mary Elmer Lake. He is survived by; his wife, Sharron Benedetti of Upper Deerfield Twp; two sons, Kyle Benedetti of Commercial Twp and Louis Benedetti (Jackie) of Alloway Twp; his sister, Carol Harrison of Philadelphia; his grandchildren, Taryn, Amelia and Annie; and a great grandson, Jacob. He was preceded in death by his parents and his brother, Robert Benedetti. A visitation will be held on Friday, March 25th at 2PM at the Padgett Funeral Home, 1107 State Highway 77, Upper Deerfield Twp. In lieu of flowers, the family ask that donations be made in Louis' memory to the American Cancer Society, https://www.cancer.org/involved/donate.html or to St. Jude Children's Research Hospital, https://www.stjude.org/donate/donate-to-st-jude.html Written condolences can be sent to the family through the funeral home website at www.padgettfuneralhomes.com.