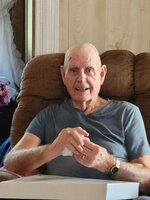 Floyd C. Jenkins, 92 of Cedarville, passed away Wednesday, January 5, 2022 at Inspira Medical Center in Vineland due to Covid complications. Born and raised in Newport, he was the son of the late Florence and Clarence Jenkins. He was the husband of Flora “Williams” Jenkins. Floyd served his country while in the US Army serving during the Korean War. He was stationed in Germany as a Sargent in the medics. Floyd loved working on the water. He was an oysterman and commercial crabber for many years while working full time at U.S. Silica for thirty-three years before retiring. Floyd developed a love for the Lord and accepted him into his heart, he devoutly read his bible everyday. In his free time, he also loved watching NASCAR and developed a knack for cooking. He was a devoted husband to his wife Flora for sixty-one years. He loved his children, grandchildren and great grandchildren deeply. He is survived by; his wife, Flora Jenkins of Cedarville; his daughter, Jackie Kuhn (Bruce) of Cedarville; his son Glenn Loll (Sarah) of Millville; brothers, Clarence Jenkins (Janet) of Florida and Elsworth Jenkins of Millville; six grandchildren, Kelly Zurlo (Anthony), Bruce Kuhn (Leanne), Michelle Gove, Erin Green, Holly Mummert (Chris) and Chris Loll; and four great grandchildren; Anthony Zurlo, Daniel Zurlo, Kaylee Green and Griffin Loll. He was preceded in death by; his sister, Mary Emma Kiel and step-son David Loll. Funeral services will be held at the PADGETT FUNERAL HOME, 1107 State Highway 77, Upper Deerfield Twp. on Wednesday, January 12th at 11 AM. Interment will take place at Cedar Hill Cemetery in Cedarville. Friends will be received at the funeral home from 10 AM to 11 AM prior to the services. Written condolences can be sent to the family through the funeral home website at www.padgettfuneralhomes.com.