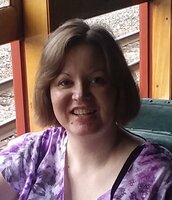 April Heather Starr, 47, of Hopewell Twp. passed away peacefully on Tuesday, December 28, 2021 at her home under hospice care following a 20 year battle with brain cancer. Born in Vineland to Steve Boehm and Brenda Coulter Boehm, she was the wife of Kenneth A. Starr, Jr. April had been a long time resident of Millville. April had pursued a career as a dental assistant at Cumberland County VoTech and had worked at several local dentist offices around the Cumberland County area. In her free time, she enjoyed making crafts and watching the Philadelphia sports teams. April will be greatly missed by her cats and dogs. She is survived by; her husband, Kenny Starr, Jr. of Hopewell Twp., her parents, Steven and Brenda Boehm; her mother and father in law, Kenneth, Sr and Patsy Starr; her siblings Heather Viruet (Louis) of Marlton and Samantha Pezzella of Millville; her sister in law, Cindy Noblett; her nieces and nephews, Caitlyn Pezzella of Millville, Amber Sutcliff (Ricky) of Millivlle, Wesley Pezzella (Haley) of Port Elizabeth, Hollie Noblett of Millivlle and Tyler Noblett of Millville and many cousins. She was preceded in death by; her maternal grandparents, Harry and Reba Coulter; her paternal grandparents, Alfred and Helen Boehm; her aunt, Sherry Coulter and her uncle, Marty Coulter. Funeral services will be held privately at the convenience of the family. In lieu of flowers, the family suggests donations may be made in April's memory to the South Jersey Regional Animal Shelter, 1244 N. Delsea Dr., Vineland, NJ 08360. Written condolences can be sent to the family through the funeral home website at www.padgettfuneralhomes.com.