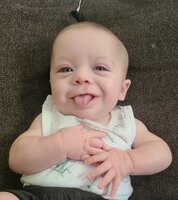 Giovanni F. Vettese, aged six months, passed away unexpectedly at his home on Monday, November 15, 2021. Born in Voorhees Twp. to Joseph A. Vettese and Lisa Lewis, he lived in Monroeville with his parents all of his life. Giovanni was a happy child with bright blue eyes. His family remembers him best for sticking out his tongue at them and snorting when he laughed. Giovanni had a big appetite and was always excited for his next meal. He loved his parents and family so much. He is survived by; his parents, Joseph Vettese and Lisa Lewis of Monroeville; his older brother, Joseph Chladek; his maternal grandparents, Christine and George Lewis of Monroeville; his paternal grandmother, Vicki Jo Vettese of Ridley Park, PA; his uncles, Anthony Vettese (Jess) of Wenonah and Josh Hartsell of Monroeville; his aunts, Laura Foster (Pat) of New Bern, NC and Laura Fitzgerald (Sean) of Lehigh Valley, PA; his great grandmother, Irene E. Vettese of Coudersport, PA and a host of aunts, uncles and cousins. He was preceded in death by; his great-grandmother, Wilma Hartsell and his great grandfather, Giovanni “John' Vettese. Funeral services will be held at the PADGETT FUNERAL HOME, 1107 State Highway 77, Upper Deerfield Twp. on Monday, November 22nd at 11 AM. Interment will take place at Centerton Free Will Baptist Cemetery in Pittsgrove Twp. Friends will be received at the funeral home from 10 AM to 11 AM prior to the services. Written condolences can be sent to the family through the funeral home website at www.padgettfuneralhomes.com.