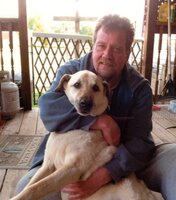 Joseph B. “Jody” Cobb Jr., 59, of Cedarville, passed away on Thursday, October 14th, 2021 at Inspira Medical Center in Vineland. Born in Bridgeton to the late Joseph Cobb Sr. and Florence Cobb, he was the husband of Veronica Ellis-Cobb. Jody moved around the country during his childhood but found his way back to Cedarville, where he was a longtime residence. Jody was the Chief of Communications for the Cumberland County 911 center for 20 years, until his departure in 2005. After leaving the 911 Center, Jody went on to become a licensed industrial electrician and would work throughout all of South Jersey until the time of his death. He had been a member of the Cedarville Fire Department for over 30 years. In his free time, Jody enjoyed hunting and fishing. He was an avid NASCAR fan and his favorite driver was Tony Stewart. Jody was also a fan of Philadelphia sports, especially the Phillies and Eagles. He was a big history buff and took great joy in collecting civil war era pieces. Jody is survived by; his wife, Veronica Cobb of Cedarville; three children, Joseph B. Cobb III of Newport, Louis “Tony” Cobb (Marguerite) of Cedarville, and Ashley L. Diaz (William) of TX; two step-daughter's, Amanda H. Sheppard of NC, and Emily Yarrington of Cedarville; three siblings, John Cobb (Phyllis) of Bridgeton, Patrick Cobb of Cedarville, and Leda Marie Garcia (Kenny) and thirteen grandchildren. He was preceded in death by; his father, Joseph Cobb Sr. and his mother, Florence Lake-Cobb. Services will be held privately at the convenience of the family. Written condolences can be sent to the family through the funeral home website at www.padgettfuneralhomes.com