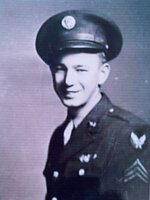 Frederick J. “Fred” Schilling Jr., 100 of Bridgeton passed away on Wednesday October 6, 2021 under the care of his family and hospice. Born in Trenton, he was the son of the late Frederick J. Schilling Sr. and Julia Schilling. Prior to residing in Bridgeton, he lived in Crosswicks, NJ with his loving wife Gloria of 69 years. Fred was a veteran of the United States Army Air Corp. While in the Army, Fred became a sergeant and trained for two years to become a flight engineer. At 22 years old, he remembered a specific training flight, flying B-24’s preparing to eventually fly 80 new planes that would go to Africa. While in flight the electrical system went out, as their plane began to nose dive they were told “to jump out!” Some tried to escape from the “waste gunners” opening or through the “camera hatch.” Only 3 of the 9 members from the flight crew were able to parachute out, Fred was the only survivor. After an honorable discharge, Fred worked for the Carpenters Union for many years. Fred was an avid antique collector, loved repairing clocks, going to yard sales and gardening. His friends and family will always remember him for his outrageous stories and his memory will live on through them. Surviving are his two daughters, Patricia Goebel (Karl) of Bridgeton, Linda Tedder (Bob) of Yardville, NJ and son Ronald Schilling (Debbie) of Waterford, WI. Grandchildren Lori Carella, James Harrison (Kelly), Julie Schock (Michael), Mark Schilling (Debbie)and Elizabeth Schilling. Great grandchildren Aaron Carella, Chloe Harrison, Jared Carella, Caleb Carella, Kylie Harrison, Ella Harrison and Kai Schock. Great-great granddaughter Ava R. Carella. He was predeceased by his wife Gloria Schilling and great grandson Brandon Carella. Funeral services will be held on Tuesday, October 12th at Padgett Funeral Home, 1107 State Highway 77, Bridgeton. Friends will be received from 10:30 to 11:00 am, the service will begin at 11:00 am. In lieu of flowers the family asks that contributions in Fred’s memory be made to the charity of your choice. Written condolences can be sent to the family at www. padgettfuneralhomes. com