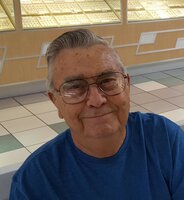 Robert Earl White, 88, of Hopewell Twp. passed away on Wednesday, September 8, 2021 at his home. Born in Natchez, Mississippi to the late James N. White and Ruby Mullins White, he was the husband of Violet Sewell. Robert had lived in Hopewell Twp. for the past 10 months and prior to that he had lived in Florida for the past 20 years in Port St. Lucie, Hudson and Vero Beach. Before that he had resided in Hopewell Twp. Robert had worked at B's Plumbing in Bridgeton for over 20 years. He had been previously employed with Dare's Plumbing also in Bridgeton. Following his retirement, Robert would purchase properties in Florida and refurbish them for sale. He was a member of the Deerfield Elk's Lodge. In his free time, Robert had coached Senior League at West Cumberland Little League and had even achieved a championship victory. He also enjoyed riding motorcycles, particularly Harley Davidsons and later Honda Gold Wings and was a member of the Gold Wing Riders Association. In his younger years, he would race scrambles through the Wharton State Forrest woods run. Robert also was an avid lover of animals. Besides his wife, Violet he is survived by two sons, William “Bill” White (Susan) of Hopewell Twp. and Samuel “Sam” White of Cape May Courthouse and four grandchildren, Jesse, Steven, Juli and Samantha White. He was preceded in death by his siblings Estelle White, James H. White, Retha Jeanette White Vaillancourt Waldron, Edith Pearl White Wendell, Sarah Margaret White Mack North and Ester Monel White Rain. Funeral services will be held privately at the convenience of the family. Graveside committal services and interment will be held at a later date at Fernwood Memorial Park in Hopewell Township. In lieu of flowers, the family requests donations can be made in Robert's memory to the South Jersey Regional Animal Shelter, 1244 N Delsea Dr, Vineland, NJ 08360. Written condolences can be sent to the family through the funeral home website at www.padgettfuneralhomes.com.