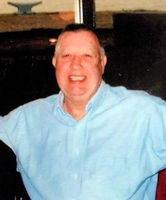 Paul T. Muffley, 81, of Stow Creek Township passed away on Saturday November 14, 2020 at Inspira Medical Center in Vineland. Born in Johnstown, PA to the late William Muffley and Stella Webb Muffley, he was the husband of Frances Macera Muffley. He moved to the Pole Tavern area in 1962 after finding work at the Owens Illinois Glass Co. in Bridgeton. He later moved to Stow Creek in 1975 where he was a resident for the rest of his life. Prior to his retirement, Paul had served on the custodial staff for the Stow Creek Township Board of Education. He had also been previously employed at Owens Illinois Glass Co. at the Bridgeton and Glassboro locations and with the Bridgeton Board of Education as part of the custodial staff. In his free time, he enjoyed watching sports, especially the Green Bay Packers and traveling with his wife. In his younger years, Paul enjoyed camping trips with his family. He is survived by his wife, Frances M. Muffley of Stow Creek Twp.; two daughters, Dawn Pettit (Albert) of Stow Creek Twp. and Debbie Muffley (Julie) of Alloway Twp.; two sisters, Lois Kuhar of Bridgeton and Sandra Compton of MD; his grandchildren, Jamie, Zach, Emily Flores (Cruz), Abby, Alana and Addison and five great grandchildren, Seth, Cara, Maxie May, Ellie James and Kameron Zachary. He was preceded in death by his sister, Anna Mae Michael and seven brothers, William Muffley, Chuck Muffley, Robert Muffley, Leo Muffley, Pete Muffley, Ronnie Muffley and Joseph Muffley. Memorial services will be held at a later date. Further information regarding those services will be posted here on the funeral home website when available. In lieu of flowers, the family requests that donations may be made in Paul’s memory to Shiloh Seventh Day Baptist Church, PO Box 145, Shiloh, NJ 08353 or to a charity of one’s choice. Written condolences can be sent to the family through the funeral home website at www.padgettfuneralhomes.com.