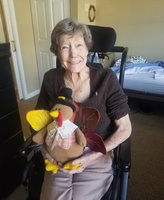 Geraldine McPherson, 89, passed away on November 8, at her beloved Maurice House Assisted Living which she had called home for the last seven years. Geraldine (Gerry) was born in Venice, CA to Troy and Eunice White on February 7, 1931. Her family later moved to Grants Pass, Oregon where she attended high school, married and had three children. She also lived in Tucson, Arizona and Sacramento, CA. While living in Sacramento with her three children, she remarried. She and Ellis (Mac or Bobby) McPherson, who was with the Air Force at Mather AFB, began a life together of new adventures which included living overseas for several years and two long road trips across the U.S. Over the years they were stationed in Maryland, the Philippines and then had one final transfer to southern California. Upon retirement, in 1984, they settled in Mac’s hometown, Bridgeton, New Jersey. Geraldine greatly enjoyed her years of travel as a military wife. In 2013, a few years after Mac passed, she moved into Maurice House in Millville, New Jersey, where she found much love, peace, and contentment. Through all her years, Geraldine loved being a homemaker. She also enjoyed gardening, preserving the bountiful produce from their garden, sewing, crocheting, crossword puzzles and once in New Jersey, taking trips to Cape May and Fortescue. As a young woman, she was very active in music. She had a beautiful soprano singing voice and took the lead in school productions, church choirs, and sang for weddings and special gatherings for many years. Geraldine will be remembered fondly for her energetic childlike nature, her quirky sarcastic sense of humor, and her beautiful smile which she shared freely. Geraldine is survived by her children, Terry Hunt(Steve) of Nevada City, CA, Scott Whaley(Shelley) of Chalfant, CA. and Brian Whaley(Karen) of Marietta, Georgia, her grandchildren Justin, Devin, Kayla, Sara, and Cody and her great grandchildren, Elliott and Violet. She was predeceased by her husband Ellis(Mac or Bobby) McPherson, her father Troy White, her mother Eunice White, her brother Troy White, Jr. and her sister Arlette Marcum. The family wishes to express their heartfelt gratitude to the staff and residents of Maurice House for their years of dedication, love, care, and compassion. Much appreciation is extended to her sister-in-law and brother-in-law, Dale and David Capps for watching over her and for the friendship they gave. Also, her hospice nurses and caregivers brought her such peace and comfort. You were all a gift to Mom and the family. Graveside funeral services will be held on Friday, November 20th at 2:00 PM at Cumberland County Veterans Cemetery, 95 Trench Road, Hopewell Township where the interment will follow the services. Arrangements are under the direction of the PADGETT FUNERAL HOME, Upper Deerfield Township. Written condolences can be sent to the family through the funeral home website at www.padgettfuneralhomes.com