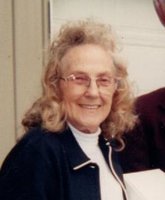 Dorothy “Dot” Hemple, 92, of Bridgeton passed away on Thursday, September 10, 2020 at her home. Born in Fairfield Twp. to the late Charles Richey and Stella Biddle Richey, she was the wife of the late Thomas P. Hemple. Dot had been a Bridgeton and Fairfield Twp. resident most of her life. She had been previously employed as a supervisor at the former Seibel and Stern Clothing Company in Bridgeton for 40 years. She is survived by four children, Beth Richey of Bridgeton, Thomas A. Hemple (Joan) of Fairton, Wayne Hemple (Donna) of Fairton and Russell Hemple (LuAnn) of Millville; five grandchildren, ten great-grandchildren and three great-great-grandchildren. Besides her husband, Tom, she was preceded in death by five siblings, Verna Garron, Martha Richey, Stella Richey, Melvin Doran and Ethel Doran. Funeral services will be held at the PADGETT FUNERAL HOME, 1107 State Highway 77, Upper Deerfield Twp. on Wednesday, September 16th at 11 AM. Interment will take place at Overlook Cemetery in Bridgeton. Friends will be received at the funeral home from 10 AM to 11 AM prior to the services. Due to current regulations associated with the Covid-19 healthcare situation, we are limited to 50 people within the funeral home at a time and the understanding and cooperation of the public is greatly appreciated. Written condolences can be sent to the family through the funeral home website at www.padgettfuneralhomes.com.