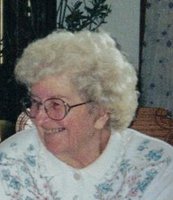 Mary Dragotta, 94, of Pittsgrove Twp. passed away on Monday, September 7, 2020 at Genesis-Millville Center. Born in Flint, MI to the late Timothy and Rose Berkey, she was the wife of the late Dominic Dragotta, Sr. Mary moved to Newark, New Jersey during her childhood and in the late 1930's moved to Rosenhayn. She was a Pittsgrove Township resident most of her life. In addition to being a homemaker, tirelessly caring for her family, Mary had co-owned and operated the Fabric Spot on Buck Rd. in Pittsgrove Twp. with her husband, Dominic. She was a member of the former Sr. Andrews Episcopal Church in Bridgeton. In her free time, Mary loved gardening especially flowers and vegetables. She and her husband also sold their homegrown raspberries from their home and used the proceeds to travel around in their RV. Her family also described her as a great cook. She is survived by; three children, Dominic Dragotta, Jr. (Judith) of Chestertown, MD; George Dragotta (Mary Harbs) or Pittsgrove Twp. and Andrea Sayre of Upper Deerfield Twp.; five grandchildren, Sydney, Nicholas, Douglas, Alysia and Dominica and 12 great-grandchildren. Besides her husband, Dominic Dragotta, Sr.; she was preceded in death by; her son, Richard Dragotta and four siblings, Stephen Berkey, John Berkey, Michael Berkey and Pleyton Berkey. Funeral services will be held at the PADGETT FUNERAL HOME, 1107 State Highway 77, Upper Deerfield Twp. on Saturday, September 12th at 11 AM. Interment will take place at Laurel Lawn Cemetery in Upper Deerfield Twp. Friends will be received at the funeral home from 10 AM to 11 AM prior to the services. Due to current regulations associated with the Covid-19 healthcare situation, we are limited to 50 people within the funeral home at a time and the understanding and cooperation of the public is greatly appreciated. Written condolences can be sent to the family through the funeral home website at www.padgettfuneralhomes.com.