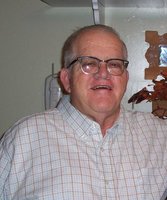 Louis S. Chew, Jr., 81, of Upper Deerfield Twp. passed away on Friday, September 4, 2020 at Inspira Medical Center in Vineland. Born in Swedesboro to the late Louis S. Chew, Sr. and Anna Chew, he was the husband of the late Audrey Lykens Chew. Prior to his retirement, Louis had worked for Safeway Freezer Co. in Vineland for over 40 years. He had also previously owned and operated Chew's Electrical Appliance Service in Elmer. Louis was a veteran of the United States Army and a Bridgeton High School Class of 1956 graduate. In his free time, he was an avid hunter and fisherman. He also enjoyed sprint and modified dirt track racing and carving decoys. Most of all he loved spending time with his two best friends, his dogs, Finn and Skeet. He is survived by; two children, Douglas Chew (Denise Higbee) of Fortescue and Debora Eckert (Harry) of Upper Deerfield Twp.; three grandchildren, Erin Elizabeth Eckert, Chase Jacob Eckert and Dana Elizabeth Chew; his sister, Patricia Peer of Hopewell Twp. and several nieces and nephews. Besides his wife, Audrey he was preceded in death by; a grandson, Joseph S. Chew and a sister, Joan Buirch. Graveside services will be held at Shiloh Seventh Day Baptist Cemetery, 116 East Ave, Shiloh, NJ 08353 on Friday, September 11th at 10 AM. In lieu of flowers, the family requests that donations be made in Louis's memory to Cumberland County Ducks Unlimited, 2 Rosewood Road, Millville, NJ 08332. Written condolences can be sent to the family through the funeral home website at www.padgettfuneralhomes.com.