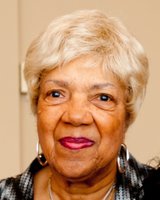 Helene Priscilla Wilder, known to her family and friends as "Helene" passed away on July 4, 2020 at the age of 93. She was born to the late Sarah A. Clarke and James Jones, Sr. on June 23, 1927 in Wilmington, North Carolina. She is predeceased by her siblings, Evelyn Harris, Marie McClutchen, James Jones, Jr., William Jones, Henry Jones and Richard Jones. After her graduation from Atlantic City High School, Helene moved to New York and worked at Metropolitan Life Insurance Company as a keypunch operator and bookkeeper. It was in New York that she met her first husband George Ray. Thereafter, she moved to Philadelphia and was employed at WCAU News Radio (now known as CBS) where she worked in the I.B.M. Department manually inputting data and performing all accounting functions. At night, Helene worked as a bar maid at jazz clubs like Blue Note and Bill & Lou's. She fell in love again and married Maurice Wilder and they made their home in Philadelphia. After living in various cities in Pennsylvania and New York, Helene returned home to Atlantic City. She loved to stay busy and active so she took a job at Resorts as a pit clerk and slot attendant and when that wasn't moving, she got on the bus, literally, as a spotter for Greyhound. Her last equally interesting job was at the Atlantic City Police Department where she worked in the Criminal Intake Unit performing administrative duties until her retirement in 1989. Helene was a wanderlust and social butterfly. She loved to travel, meet new people and experience new adventures. Her passport was always full. She visited numerous places including Paris, Italy, Greece, Egypt, Canada, Australia, Alaska, the Grand Canyon, Panama, London, the Caribbean and North Africa where she rode an elephant and giraffe. She also enjoyed having friends and family visit her in Atlantic City, walking the boardwalk, shopping trips and playing Bingo. In spite of her age and health, she volunteered in Mayor Jim Whelan's office for years working the polls and performing outreach. She wasn't into television but she did enjoy watching Family Feud with Steve Harvey while doing her word puzzles. Every week she looked forward to dressing up for her trips to the Rosen Center where she could mingle with other seniors. She was very kind and generous treating all her cousins, nieces and nephews as her own. She will be dearly missed. Graveside services will take place at a later date. Written condolences can be sent to the family through the funeral home website at www.padgettfuneralhomes.com,