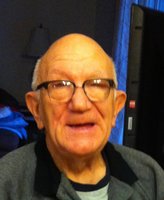 Erhard Tiltmann, 83, of Bridgeton passed away on Wednesday, June 10, 2020 at Eagleview Center in Pittsgrove Twp. Born in Germany to the late Franz Tiltmann and Margarita Hein Tiltmann, he was the husband of the late Maria Schmidt Tiltmann. Erhard had been a resident of Upper Deerfield for 53 years and prior to that he had lived in Germany. Before his retirement, Erhard had worked as an HVAC mechanic with union local 322 out of Winslow Twp. He loved to listen to music especially southern gospel. His family described him as a Godly man and when he came here to the United States it was with the goal of helping to establish the German church in Upper Deerfield Twp. where he served as its choir director for 20 years. He is survived by his two children, Alfred Tiltmann and his wife, Debbie of Vineland and Judith Guy of Upper Deerfield Twp.; his former son-in-law, Michael Guy of Upper Deerfield Twp.; four grandchildren and three great-grandchildren. He was preceded in death by his wife, Maria Tiltmann and his sister, Waltraud Kunkle. Funeral services will be held privately at the convenience of the family. Written condolences can be sent to the family through the funeral home website at www.padgettfuneralhomes.com.