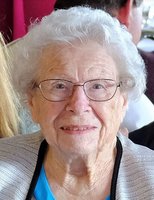 Alice G. Fogg, 96, of Stow Creek Twp. passed away at her home on Thursday morning, March 19, 2020 under the care of hospice and her family. Born in Elmer to the late Harrison Garrison and Christianna Camp Garrison, she was the wife of the late Newlin Hitchner and the late William Fogg. Alice was raised in Elmer but had been a resident of Stow Creek Twp. most of her life. Prior to her retirement, she had worked at M.C. Schrank Co. in Bridgeton as a sewing machine operator for 24 years. Alice was an active member of Shiloh Seventh Day Baptist Church in Shiloh. She was a former member of the Garden Patch Quilting Club and the Elmer, Friesburg and Shiloh Grange Associations. In her younger years, Alice enjoyed playing guitar and banjo. She is survived by; six children, Neil Hitchner of Stow Creek Twp., Raymond Leland Hitchner of Alloway Twp., Jay Hitchner of Elmer, Patricia Ford of Arkansas, Christine Sharkey of Stow Creek Twp. and H. Scott Hitcher of Quinton; four stepchildren, Emily Mayhew of Cohansey, Eleanor Shepard of Stow Creek Twp., Jeff Fogg of Bridgeton and Mary Sermersheim of KY; 12 grandchildren; six step-grandchildren; nine great-grandchildren and 6 great-great-grandchildren. She was preceded in death by; her first husband, Newlin Hitchner; her second husband, William Fogg; her son, Dennis J. Hitchner; her step-grandson, Ryan Fogg and a great-great-grandson. Funeral services will be held privately at the convenience of the family. Interment will take place at Daretown Presbyterian Cemetery. Due to newly issued Executive Order #107 the public visitation for Mrs. Fogg has been cancelled. Due to the current health situation we ask that all who attend maintain social distancing. If you are feeling ill or are of advanced age we ask that you please consider your own health and the health of those in our community before attendance. Written condolences can be sent to the family through the funeral home website at www.padgettfuneralhomes.com.