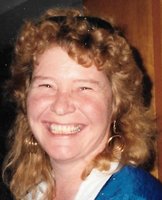 Sharon Ann Ludlam, affectionately known as Nan, 65, of Hopewell Twp. formerly of Salem passed away on February 8, 2020 at the Cumberland Manor in Hopewell Twp. following a lengthy battle with Multiple Sclerosis. Born in Salem to the late John E. Ludlam and Frances Dean Ludlam, she had been a resident of Salem County most of her life. Raised in Elsinboro, Sharon had also lived for about 10 years in Ocean County. Prior to her diagnosis with Multiple Sclerosis, she had worked in housekeeping for Mezinna Realty in Ocean County. Sharon was a dedicated homemaker to her two daughters. As an animal lover, she was particularly fond of her horse, Buster and all of her orange cats. Sharon was a fan of country music especially, Alabama. She is survived by; two daughters, Andrea Buckalew of Oswego, NY and Stephanie Wolfer and her husband, David of Pennsville; her sister, Paula Nelson and her companion, Wilbert Gandy; five grandchildren, Jessica Holland, Ryan Holland, Kevin Wolfer, David Wolfer and Austin Wolfer (Jenna) and eleven great-grandchildren. She was preceded to death by; two brothers, Guy Ludlam and John G. Ludlam and a great-granddaughter, Gabriella Holland. A memorial service will be held at the Church of the Nazarene, 172 Churchtown Rd., Pennsville NJ on Saturday, February 15th at 1 PM. In lieu of flowers, the family requests that donations be made in Sharon's memory to the National MS Society, P.O. Box 4527, New York, NY 10163. Written condolences can be sent to the family through the funeral home website at www.padgettfuneralhomes.com.