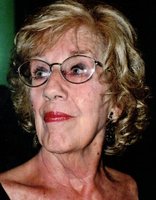 Florence “Dolly” Newhard, 88, of Elmer passed away on Thursday evening, February 6, 2020 at the Bishop McCarthy Residence in Vineland. Born in Bridgeton to the late Harry F. Halter, Sr. and Nellie Beebe Halter, she was a resident of Elmer for the past 7 years. Prior to that, Dolly had lived in Carney's Point and Pennsville for over 40 years. Before her retirement, she had worked for Acme Markets at their Bridgeton, Pennsville and Woodstown locations for 42 years. Dolly loved her family and friends and especially times spent in Ocean City. She is survived by her daughter, Stefanie L. Wheaton and her husband, Sam of Elmer; her grandson, Jack Wheaton of Elmer; her brother-in-law, Herman Girock of Bridgeton and many nieces and nephews. She was preceded in death by five brothers, Robert Halter, Harry Halter, Eugene Halter, Edward Halter and Donald Halter; two sisters, Molly Irons and Mary Girock and a special nephew, Gerald Halter. Funeral services will be held at the PADGETT FUNERAL HOME, 1107 State Highway 77, Upper Deerfield Twp. on Tuesday, February 11th at 11 AM. Interment will take place at Laurel Lawn Cemetery in Upper Deerfield Twp. Visitations will be held at the funeral home on Monday evening, February 10th from 6 PM to 8 PM and on Tuesday morning, February 11th from 10 AM to 11 AM prior to the services. In lieu of flowers, donations can be made in Dolly's memory to Woof Love Animal Rescue in Collingswood or a charity of ones choice. Written condolences can be sent to the family through the funeral home website at www.padgettfuneralhomes.com